Sumagrow cuts gestation of foraging grass nearly in half.

“The treated with the sumagrow was up, visible in 4 days. The untreated was the regular 7-10 days.”

“From the day we planted it, to the day we started turning cattle onto it and grazing it was 4 weeks. Four weeks we were grazing it. It’s the middle to the end of May right now and my treated [with Sumagrow] prime rye grass is still grazing. Usually our rye grass has already died out by now…”

“We’ve noticed not only our grass has done better this year, we’ve been able to graze more cattle per acre but the condition over cattle has been a lot better this year. We’ve weaned off heavier calves…momma cows produce better milk which is going to help raise these calves.”

“The roots on the rye grass had a lot better system, a lot deeper…all of my property is rolling hills and it holds up better to the washing and any issues as far as erosion.”

“We have had extremely good results with Sumagrow.”

Four months after the first SumaGrow application (referred to as ExploGrow in report), the root system more than doubled.

The “more than doubling” of the root system enhances the plant’s ability to absorb nutrients, hence reducing chemical fertilizer requirements, reducing water needs by about 20% and makes the plant more resistant to extreme heat, cold/frost and typically increases the yield and the Brix dramatically. 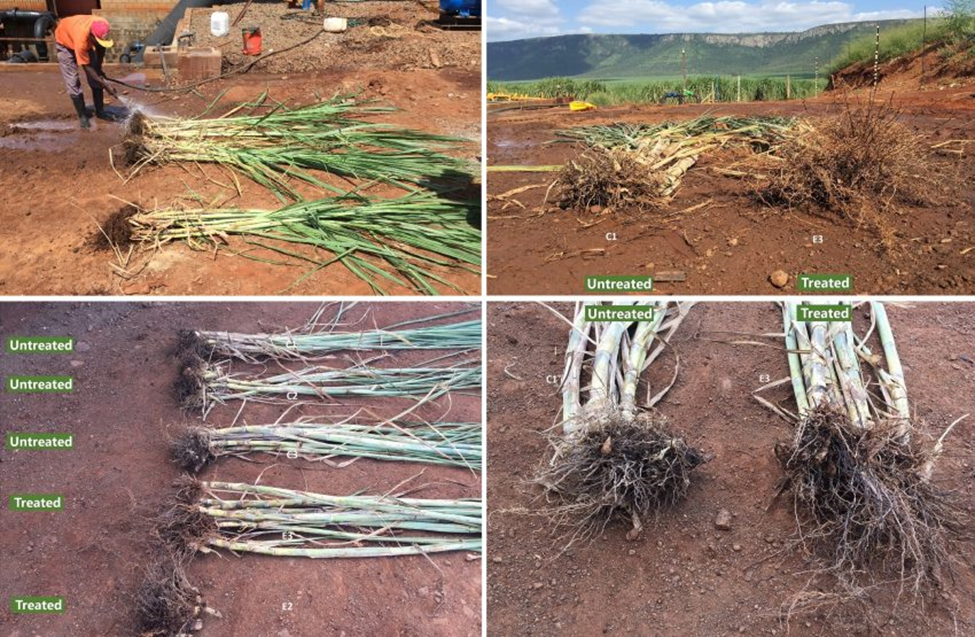 After only four months, soil conditions already visibly improved compared with the control.

“This is due to the increased biological activity by the 17 microbes in ExploGrow (SumaGrow) and the consequent much larger roots systems” – Mark Young, BSc.

At harvest the main SumaGrow area produced 114 tons/hectare which is in an increase of 28 tons/hectare (+32.56% increase)

Results after about a year:

“ExploGrow™ represents more than increased yield, crop quality and rejuvenated soil. True sustainable agriculture requires real and safe solutions enabling farmers to cut down on chemical fertilizers, poisons, and using less water. We must, before it is too late, give serious attention to the health and sustainability of our soils. We must now embrace more responsible new farming methods.”- Mnr Dreyer Senekal, Senekal Boerdery