Joyful Farms is located in Hemet, California, where 37 types of Chinese vegetables like bok choy, mustard greens, nira, etc. are grown. Aidy Yang was hired to rehabilitate the soil and he began using 5 gallons of SumaGrow on 5 acres of their Long Run field with no other inputs. On the Short Run field, Aidy would use 5 gallons on 8 acres and reduced his fertilizer inputs by one half. 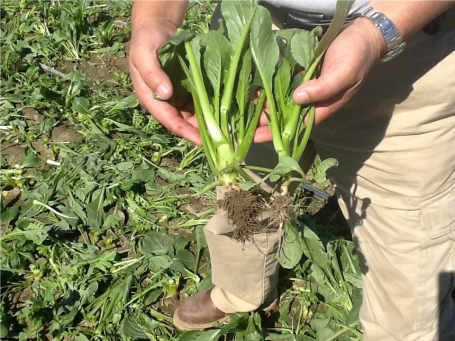 Harvesting actually began 9 days earlier than normal and the stems were thicker than normal in many cases (shown on the right). The mustard greens shown below are a 60 day crop, but 5% of the crop were ready to be harvested 10 days early.

The 5 acres of the Long Run fields (on the right side) that received only SumaGrow did not do as well as the fields that were treated with an organic fertilizer (left side).

On October 17th, Aidy applied 10 gallons of SumaGrow with no inputs to the 15 acres of the Long Run Fields. The fields were planted with Baby Bok Choy, Yu Choy and Mustard Greens. Organic fertilizer (chicken manure) was applied to all 15 acres at half the normal rate.

Aidy returned to the Joyful Farms on December 5th to visit the Long Run Field and he was greeted with a green carpet of crops. The workers were thrilled because there were no weeds and 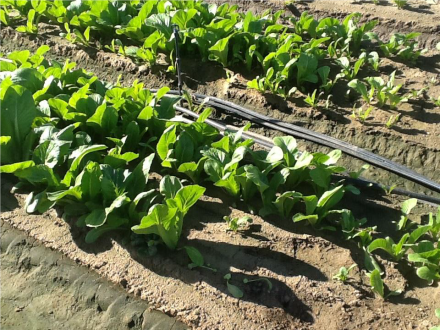 they had experienced a much faster harvest times on the Short Run Field and were also looking forward to harvesting the Long Run field. As you can see, the Long Run Field did very well.