Small trees in the nursery treated with Explogrow (SumaGrow) which were on the left, dramatically outperformed the untreated trees on the right.

SumaGrow trees produced an estimated 10kg extra per tree, compared with the untreated trees. This increase equates to an average of 25kg added production per tree, signifying a 40% improvement in mass.

The size of the Pecan nuts is also dramatically better. This places the product in the top category, resulting in the farmer being paid $0.85 more per kg, equal to a financial gain to the farmer per tree of around $21.

SumaGrow’s microbiologist is confident that similar results will be obtained with all the nut varieties grown in South Africa.

The competition for hectares between soybeans and groundnuts. 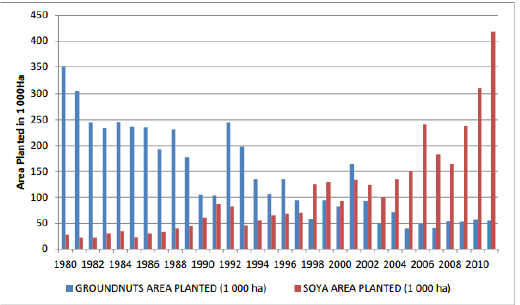 Groundnut is a major oil-seed crop in South Africa. About 200,000 ha are planted annually, producing an average yield of 1,000 kg/ha. In South Africa, Groundnut yields are not only limited by low and late summer rains and poor soils, but also by many diseases including those caused directly or indirectly by plant-parasitic nematodes. Indirect damage may include increased secondary infection by fungi and reduced nodulation and nitrogen fixation. SumaGrow has shown to be effective in significantly alleviating the underscored factors.