In August, bell pepper farmer Carmelo Piazza began a plot test in plastic tunnels with Solum Naturale SumaGrow inside. Farmers in Central Sicily are hampered in the hot, dry area by having to grow crops in sandy soil which are heavily infested with parasitic nematodes.

Carmelo soaked the seedlings in a Solum Naturale SumaGrow inside solution before planting. The control crop was fertilized and planted in the traditional manner. Towards the end of November, Carmelo observed that the control plants had yellowish top leaves, indicating the start of a nematode infestation; however, the test plots were visibly greener and healthier with no discoloration. Solum Naturale is designed to boost the natural defenses of the plants by increasing the health of the soil with a synergistic consortium of native microbes of the rhizosphere. Healthy soil contains all kinds of interdependent organisms that release mineral nutrients and water.

In January, Sicily had a rare snowstorm accompanied with freezing temperatures. As a result, all the plants were very stressed. In fact, all control plants died and had to be removed. The test plants treated with Solum Naturale SumaGrow inside, though stressed, survived and were still very healthy and yielding delicious, good-sized bell peppers. 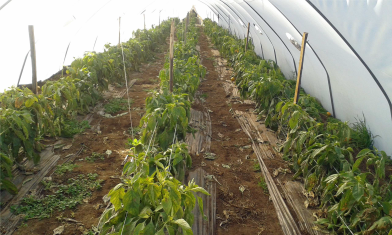 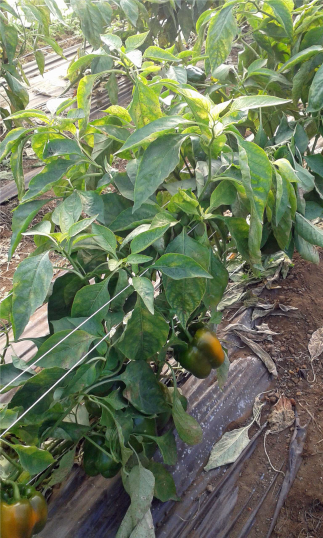 The severe weather created a large bell pepper shortage. Prices greatly increased and Carmelo was able to recoup some of his losses. According to Carmelo “We were the only growers in the area able to bring bell peppers to market.”