On Sunday, November 10th, a 55 gallon drum was filled with seawater from a boat launch in Long Beach, California. On Monday, 200mL of URB Water (Pro-con as it is referred to in report) was added to a 5 gallon pail filled with seawater. The procedure was repeated two more times. The three 5 gallon pails were taken to Joyful Farms in Hemet, California. 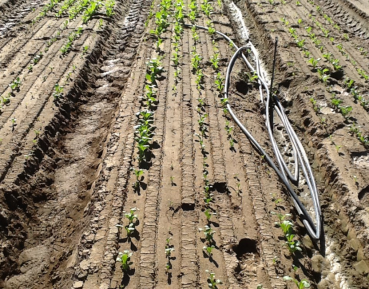 On Tuesday, November 12th, more than 100 plants were doused with 1% URB Water seawater solutions. The plants (seen to the right) were thoroughly knocked down with the force and amount of seawater (5 gallons per row) that was administered to the plants in less than one minute. The goal of the watering was to see if the plants could survive the 1% URB Water “death bath”.

No additional water or nutrients were given to the plants. On November 25th it rained during the day and partly into the night.

This picture was taken on December 5th, which was 23 days after the 1% URB Water seawater treatment and. The plants, a member of the Bok Choy family, tasted good and no one had any negative side effects from the food.

Bok Choy plants were watered with 1% URB Water seawater treatment and lived. The plants were harvested with the remaining untreated crops on December 6th, which are at the top of the picture to the left. Untreated seawater would have killed all the plants within 4 to 6 hours according to every agronomist that was consulted.